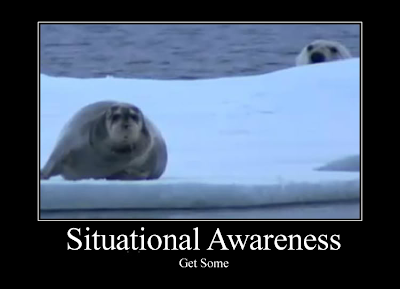 I was playing a fun game against a buddy's Black Templars last night using my Da Boyz GT list and was winning soundly.  I had eliminated one troops choice camping on the his Emperor's Will objective with shooting.  Using Mad Doc and my Stormboyz, I had also destroyed another big blob which had tried coming around the center blocker's left side.  Yes, friends, Shazzo Blitzklaws (Zagstruck) actually landed and assaulted (twice!) in this game.  I'd tied up a third unit in assault along with a dreadnought on his side of the center blocker.  My opponent assaulted this scrum with his Command Squad. Eventually, Mad Doc destroyed the Dreadnought and my Boyz in the scrum were dead.

In the end, my opponent had only six models left and I held my own Emperor's Will objective and I lost the game. 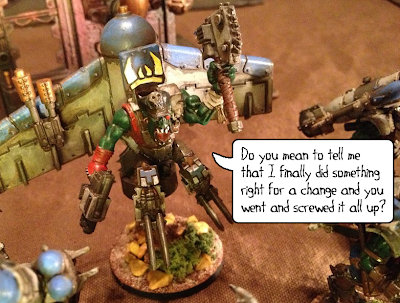 There were two major factors to my loss which are entirely my fault and absolutely unnecessary.  The first is that I failed to notice that one model remained of his last troops squad, hidden behind the center blocker. The second is that I failed to realize that The Relic was the primary objective and Emperor's Will was the secondary objective.  You can probably deduce what happened, but I'll let you know, he moved over to The Relic, picked it up, and the game ended on turn 5.

The arduous, painstaking process of eliminating all of his troops was completely wasted in that one mistake.  I'd had both of my Dakkajets remaining, so I probably could have gotten a firing solution on the model with one of them.  I also could have zipped forward with my Trukks to eliminate the model.  I could even have shot the model with Mad Doc's pistol and attempted a long assault past the Dreadnought, but I failed remain aware of the situation.

The take-home for this game is two-fold:

It was a good game, for sure, and it was made better by teaching me this important lesson which I really have to keep being taught time and again.  Hopefully, writing it down will improve my memory retention in practice.
Posted by Loopy at 6:04:00 AM