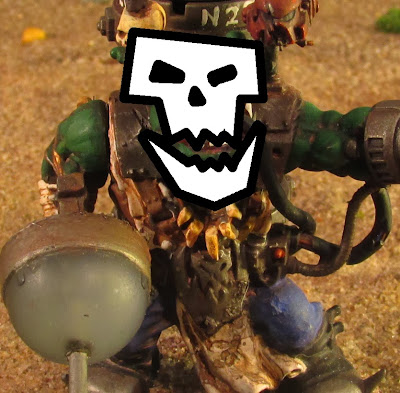 Next week is Da Boyz GT.  This is the first time I've attended the event, so I'm not really sure what to expect from it.  What I want from it is a lot of really fun games and to meet a bunch of cool people.  I'm sure I'll get that, so it's really already a win for me.  I want a good challenge, too, as usual.  I think this will be a huge challenge for me as the comp system really narrows the field of competitive netlists to a few nasty ones which I think will be made all the tougher with the WAAGH! I've put together.

I'm also looking forward to playing with the folks who regularly use this system to play their games.  I think these players are going to be very good at the game and able to worm themselves out of the situations in which I put them.  I really do think it's going to be a very tough weekend and I'm really looking forward to it.

So, the list I'm bringing is almost as eclectic as I can get while still being competitive.  I didn't go one hundred percent with Dawson's advice because there are some models that I just wanted to see on the table.  I thought that Da Boyz' comp system gave me a great opportunity to bring out some models I've not really brought into my games in quite some time.  I did, however, maintain some of the themes he'd touched upon and does answer some of the issues I was having in my comped lists to date.

The idea is to bring some of my prettiest models to the tournament while remaining at least somewhat competitive.  I have submitted the army already, so there's no going back.  If anyone has any feedback on strategy, please feel free to comment. 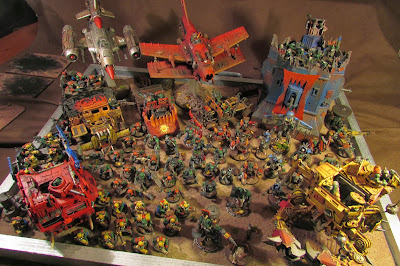 I have to bring Mad Doc.  I'm never going to attend a tournament without him.  Also, he's always going to be my Warlord, even if there's a much more sturdy and reliable Mega-Armored Warboss in the WAAGH!   It's just how it's gotta be.

For a while, I was putting Mad Doc in with Meganobz, making them fearless.  This was a cool hammer unit and all, but whenever I would be inevitably hit by a Monstrous Creature, they would challenge out Mad Doc and kill all of the Meganobz.  Then, recently, I started putting him in a battlewagon with 'Ard Boyz.  This was a really nasty unit which could take a lot of punishment.  It had the advantage of having two characters with Power Klaws in the unit which gave me something of a chance against Monstrous Creatures. The thing is, it was really quite a lot of points sticking 19 'Ard Boyz and Mad Doc into a Battlewagon and hoping they didn't get kited around the board.  Putting them in a Trukk made a whole lot more sense.  Additionally, in situations where I go second, I can put them in reserve and then zoom them on, pointing them in whatever direction I please.

This headhunting unit has been a great way to field Meganobz.  They get the shooting attention they so richly deserve or they are ignored to the detriment of my opponents.  Adding the Big Mek with a Bosspole really helps to deaden some of the leadership issues this unit has, particularly in regards to pinning checks when their Trukk gets krumped.  The longer it stays on the board, the more threat they pull, which is very important to my Battlewagons.

Da Brute Squad is a full unit of 20 Choppa/Slugga Boyz inside a battlewagon.  These guys are really great models to bring to the tournament because they've all got the coolest close-combat weapons that I could reasonably find for Orks.  The unit has lots of chains and maces and other crazy, brutal nonsense.  I know some folks swear by Shoota Boyz, but sometimes you absolutely need to overkill something in assault.  The stikkbomm Chucka on the Fat Pig has actually saved my bacon on many occasions against the likes of Necrons and Tau, so it's not a bad 5 point upgrade.

20 Shoota Boyz in a Battlewagon is a great method for deleting other hordes.  It's easy to maneuver the battlewagon around and focus-fire upon large groups of models to negate their cover saves.  It's also great for keeping one Battlewagon out of arm's reach of Melta and facing the enemy with the front armor. Having said that, these Boyz usually end up in assault as well.

I know that Da Yeller Klaw will be dead in turn 1 of most games. Better him than a Battlewagon.  Against most gunline lists, I'll hide him behind the Bastion for a 3+ cover save and just hope to be able to use him for counter-assault.  I made him a troop to avoid him being a kill point in Big Guns Never Tire.

This unit is a lot better than people give it credit for.  I can drop him in, point the boyz at whatever Interceptor remains in my opponent's army, then assault something to death.  Great for either popping something early in the game or clearing off a weakened backfield unit in turn 4.  They will also be a great, hideable scoring unit in The Scouring.

What can I say about Dakkajets that hasn't already been said before.  They are amazing.  A true equalizer for the Orks. I just have to try and take out some of the enemy's Interceptor units on turn 1.  This is quite a tall order for Orks against Tau, but to be honest, against Tau, I'll just fly the damn things right up to their biggest clump of Troops and dare them to blow it up.
WAAGH! Tower - Imperial Bastion, 125 pts (Emplaced Heavy Bolters x4)
1 Gun Emplacement (Quad-gun)

The bastion is basically my replacement for a Battlewagon where I'd normally put my Lootaz.  By putting 6 Lootaz inside and giving it a quadgun, one might argue that it's even better than a Battlewagon considering it's AV14 all around and not a kill point.

Of course there's 10 Gretchin.  Who else would man the Quadgun, but the WAAGH!'s crack gunners? On turn 5, they climb in and out of the Bastion and camp the objective I've placed behind the Bastion.

I have a lot of possible bad match-ups, but I think that my skill will allow me to ride the surfboard of mid-table obscurity throughout the tournament.  In particular, if I don't go first Tau and Eldar are just going to burn my list to the ground.  I think my realistic goal is to win half of my games and to enjoy all of them.  I don't think this is out of the question.


I'm sure I'll post again before I leave, but wish me luck anyways.

Popular posts from this blog

July 25, 2014
So I got a little me-time in tonight hobby-wise.  These were the first two Boyz squads I painted when I started playing the game in 2010.  I'd already re-done their shirts, but their metal parts and skin have always bothered me. Their barrels weren't even drilled out! I also see myself running more 'Ard Boyz in the future, so I added some 'eavy armor to the Old Boyz squad, then drilled their barrels out. As you can see, my 'Ard Boyz have all the armor plates you'd expect on them, but look at how clean the armor is.  Hardly a spot of rust!  I painted over the original 'Ard Boyz metal plates with brown and did another boltgun drybrush on them to create more of a rusted effect than just the bright boltgun-over-black that they were originally. Then, I went through and did a highlight of my high-green mixture on all 62 Boyz.  They look much more vibrant now, though I don't think that really communicates through in the pictures as much as
1 comment
Read more

June 07, 2019
The humans of Ghorok have expanded beyond that world since the coming of the Cicatrix Maledictum. Survival on the Ork worlds under the big, green thumb of Waagh! Drillteef is difficult for humanity, but not impossible.
Post a Comment
Read more