I wanted to once again thank the fine folks over at Tablewar for sponsoring the Forges of Ghorok campaign. We love the new FaT Mats and will certainly be featuring them again in the future. Here's a list of all the content we produced during this event. 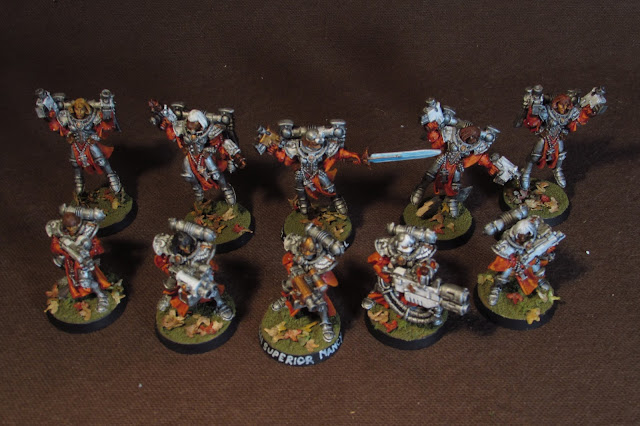 Having finished with Orks for a while, my mind was in a quandary about whether to tackle the Seraphon or the Imperial Knights next. When the new 40k Radio crew put forth a Kill Team contest, I decided to paint some of the few Sisters of Battle I had remaining. These are the Daughters of the Final Autumn for whom I have only painted one Retributor Squad in the past.

This army features Characters who are named after all the important mothers in my life as I grew up. 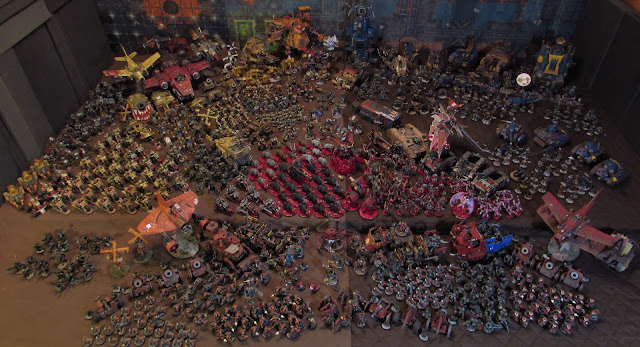 I began collecting and painting Orks in late 2010. Six years and many great, new friends later, I now have over twenty thousand points. 2016 was a huge push and I'm now down to only a smattering of Nobz and other minor models which now hide in my bitz box.

I will move from project to project, but Orks will always be my first love and I'm looking forward to doing some repaints and perhaps adding more kits next year. For now, however, I want to move on to some new projects. First, I'm doing a Sisters of Battle Kill Team list this October, then I will try to get my Seraphon assembled.  Once winter has really set in, I will start putting together my Imperial Knights.

If you want more detailed pictures of the individual units, just look back through the Blog history.

Here's a video and some individual Warband photos:

Kanz in the Can!

These Killa Kanz represent (almost) the last of my Orks. I do still have about 15 Nobz (in addition to the 30 or more I already have in the army already), but those will remain in the bitz box for now in the event that I need some seargents kitted up with something else or some other Characters. I actually would like to make a quartet of Shokk Attack Gun Big Meks on bikes at some point. For now, we're leaving it be. That'll do, pig. That'll do. I'll be making a huge post with pics of everything tomorrow. For now, here are my Kanz. Thanks to Skip for being so kind as to supply me with the project.

Gee, these guys were fun to put together. As usual, the red-on-yellow scheme is sometimes hit or miss. This project is no different. Some of these models look great, others not so much. But I'm happy with them as they are. They are extremely rough in harsh light like the rest of my models painted like this, but that's fine.

I gave them all Big Shootas. I figured that this was a good choice, representing the kind of cowardly nature of Grots. I like the idea of them slowly clanking forward, shooting at infantry, then charging into combat when they can, using Smash against anything tough enough to make their str 6 ineffective. 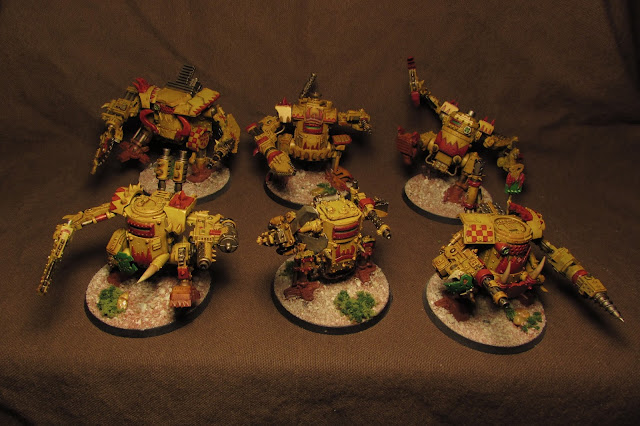 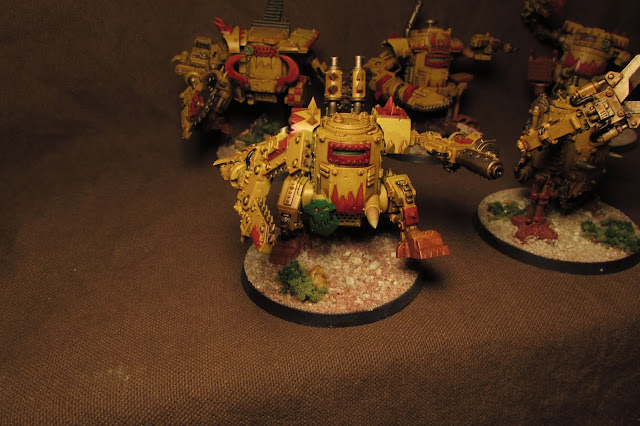 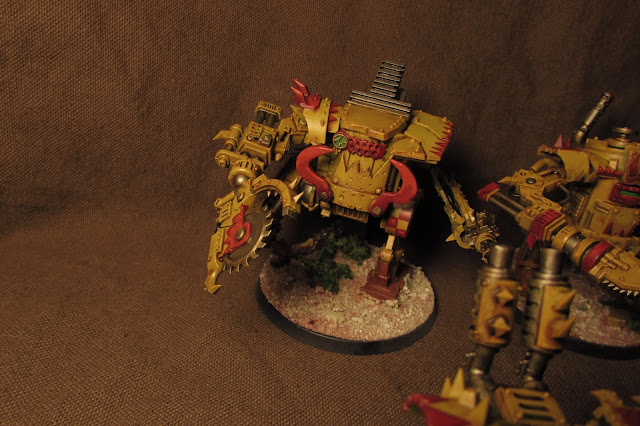 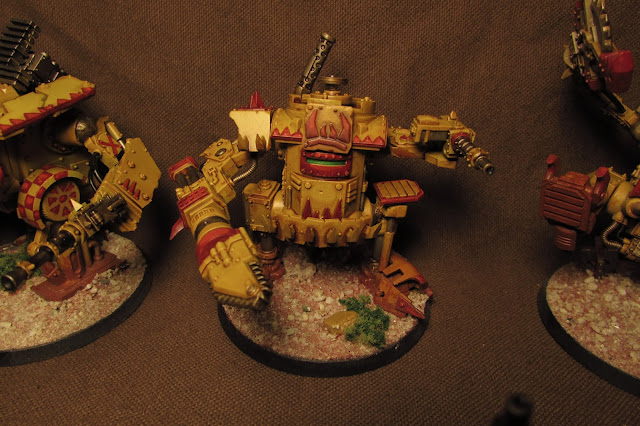 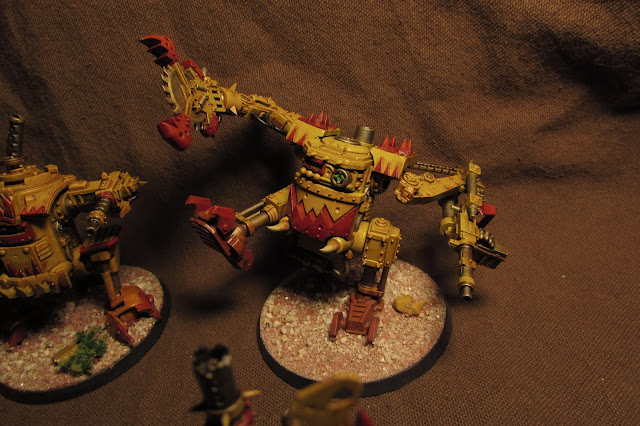 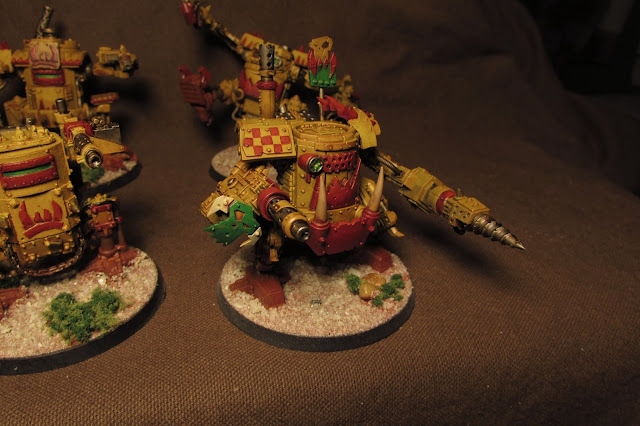 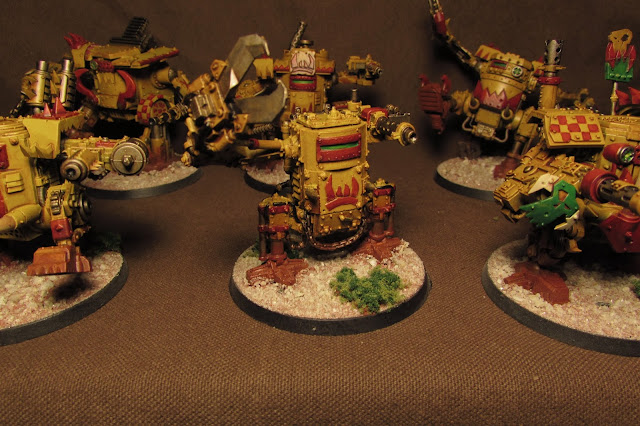 I have always wanted to buy this kit. I picked it up last week and decided to make some Spawn for my Daemon Orks army (counts-as Khorne Daemonkin).

I ran out of dullkote, so they need another shot of that before they're properly "done", but not bad for a night's work. 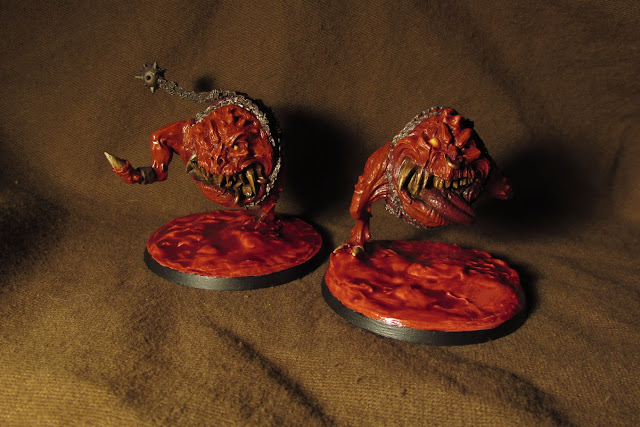 We're reaching the end of the Ork projects now. The army is at 20,376 points of painted models. This year's progress is 46 kits painted to 18 kits purchased. All I have left to do is a couple of Chaos Spawn for my DOrks made from a couple of Warhammer Fantasy squigs.  The end is nigh. I do have a squad of Killa Kans as well, but that is going in my "back burner" pile. 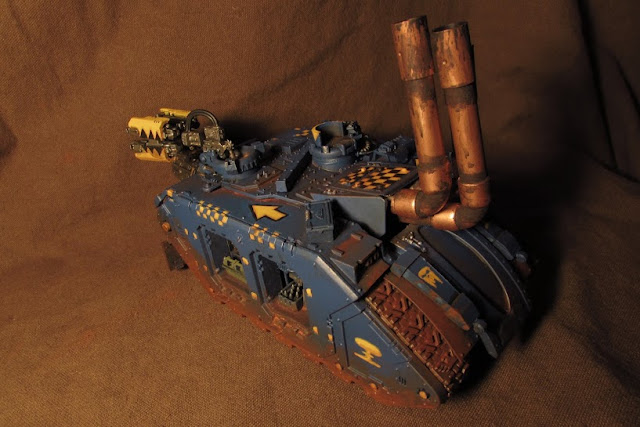